This CD production was supported by The Secretariat of Culture and Public information of Vojvodina Region and by the City Councilor for Culture of Novi Sad. 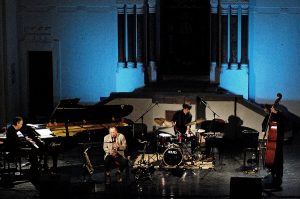 From Bach to Piazzolla, most of the composers who are of deliberate authenticity based their creative process on improvisation. Improvisation is an archetypical shape of the creative impulse in music (and in art in general). It is the basis of the creative experience, the foundation of musical vigilance and sensitivity. It rises from creative intuition and represents the irreducible, untranslatable part of the creative process. It is the source of playing and composing, their organic bond. Improvisation, in its authentic expression, is the organic compound of composing and performing: composing in real time of the exact performance and composition is, as seen, nothing else but improved, craftsman shaped and elaborated ie. arranged improvisation, which is fixed by memorizing or by notation.

Composers and instrumentalists Boris Kovač and Stevan Kovač Tickmayer have been engaging themselves for at least 3 decades in improvised music and researching the relations between improvisation and composition. In their common project, the first since Ritual Nova in 1987, called ULTIMA ARMONIA – with the participation of Miloš Matić, double bass player and composer, and Lav Kovač, one of the most talented Serbian young musicians, drummer and percussionist – in the phase of their creative maturity they decided to create a collaborative musical act, with an open shape, starting from improvisation. 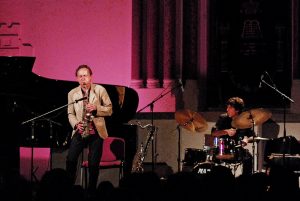 In the poetical sense, they find an ontological “background” in the traditional music and culture of the Pannonian-Carpathian-Balkan area, which represents their common spiritual, cultural and historical context. The music of this quartet is a collective attempt to redefine and reaffirm the idea of improvised music based on the dialogue among the musicians, who are equal, a dialogue whose has its deep roots in the musical tradition of the above mentioned areas. One of the usual prejudices concerning the term “improvisation” is the immediate connection of this musical practice with jazz music. Even though ULTIMA ARMONIA cannot be strictly identified as jazz., the musicians who take part into this project do not dissociate from some jazz influence while developing their musical expression.With their musical hermeneutics, the musicians add to the tradition new directions and guidelines, taking from it only what they consider vivid and inspirational for them. At the same time, they try to “revive” it, using the contemporary course of musical thinking: the language of structural improvisation enriched with positive experience of musical modernism and post-modernism as with some elements of the heritage of previous musical periods, especially the Middle Ages, the Renaissance and the early Baroque, times during which improvisational approach to musical creation was still taken in account, and which later inevitably atrophied, in accordance with Western specialization and labour division on composers and performers. In this sense this project also represents a contribution to redefine the very basis of Western musical practice.

Reviews
Background of both protagonists Quartet Ultima Armonia is not dissimilar. Saxophonist and bass clarinet Boris Kovač (1955) comes from Pannonia (born in Novi Sad) and his musical beginnings took place under the sign of a combination of ethnic and modern avant-garde inspiration (see Ritual Nova Ensemble), which emptied into the artfully conceived ritual liturgy. Novi Sad is also the birthplace of Stevan Kovacs Tickmayer. His Tickmayer Formatio captures mainly apocalypse contemporary world, “the old hopes and new fears”, recorded extensively encrypted form. The combination of both composers and musicians, not only the sum of the previous quests were (including Kovac’s “rebound” to tango-kind of commotion…), is built in symbiosis with the participation of bassist and drummer Milos Matic and Lav Kovac as captivating “Lamenting from Southeast Europe” which says the subtitle album Someone Killed the Swan. Pannonian-Carpathian-Balkan alliance, served here with a subtle hesitation, there with wistful pensiveness elsewhere with plaintive gloomines or calmed melancholy has its roots in local folklore tradition, which combines somber conceived-nesswith a bit of heroism, melancholy with inspired urgency. The whole album sounds like a dance on mines, lamenting there is conceived as a starting point and when occurs quiet vivacity is accompanied by a noticeable gloom…Mourning, whichovercomes theseverity ofthe contemporary world?

The albumas acleansing bathfor all those whowould understandinterwining searches of the pastand(post)modern concept…
Read the whole article in Czech and translation in Serbian by Vladimir Marko.

…The music expresses lamentation throughout its entire progress.  It is especially well and completely articulated in Track 7, The Rite, which starts lightly but becomes distressed and gloomy, doleful and dark, then mournful, pitiable and eventually wretched, as any of us might if we found the swan had been killed. Despite the woe, the music is wonderfully magnificent and always disciplined without being at all regimented.
Read the whole review in English.

…The program greatly benefits from an ECM Records-like audio aesthetic as each note takes on copious proportions, complementing the artists’ alluring soundscapes. A sense of intrigue permeates the production, whether Boris Kovac executes a sublime soprano sax solo or when the quartet accelerates the improv element via interconnecting dialogues and passionate expressionism…
The band’s sprightly enthusiasm continues on the final piece, aptly titled, “Final Lament.” Here Kovac’s probing sax lines touch upon mystical North African modalities, accented by Tickmayer’s gingerly integrated harmonics. Thus, variety is a contributing factor to the quartet’s success as the musicians unite quite a few influencing factors into this galvanizing production…
Read the whole review in English.

Ultima Armonia is a new project by sax player Boris Kovač (Ritual Nova) and keyboardist Stevan Kovač Tickmayer (Science Group), two major musicians from Novi Sad, Vojvodina (ex-Yugoslavia). Here they present a repertoire that arose from improvisation, and they are backed by a rhythm section of doublebass and drums. Sadness, melancholia – we are definitely in the realm of the lament. And we are somewhere between creative jazz, chamber music, and traditional music. The music is beautiful, very melodious…
Read the whole review in English.

Their music looks to…the popular tradition that is part of the culture they bring with them. And yet, from the first notes of the album, The Morning is evident that musicians are educated, highly trained on their instruments: the sound of the soprano saxophone Boris Kovac is undoubtedly that of an artist who has nothing more to learn, even from fellow Americans. Lyrical, adept at inventing melodies on a rhythmic moments very clear that it supports and to keep the attention on what is a song by the development rather complex…Someone Killed the Swan is …a reflection of what has been the recent past. The band’s music eludes current definitions however transpires outside what is the inner world of musicians including jazz, classical, Balkan, who gave a face to their sincere inner inspiration…
Read the whole review in Italian.