The Path The Path…a Path of Life…

This album has emerged as a compilation of works written for my smallest ensemble yet, a quartet, that consists of my most loyal musical comrades over the last several years: Slobodanka, Sinisa and Lav. If it was not for them, this album would not be what it is. Jasna, who recently joined us as a new member and complements my way of playing music in a unique manner, has brought an extra quality to this album, enriching what was originally written only for the quartet. The compositions were all written within a period of 15 years, and, despite their evident diversity, share something in common, as well. They are all dominated by contemplative, intimate tones…lyrical, wistful, melancholic… and their momentary ecstatic bursts are all sudden energetic and expressive digressions that almost automatically return to their original state of “quietude”. I would like to hope that this “quietude” will bring the listener a certain internal charge, a charge that will open up to him/her a world that idealistically eschews the “turbulence” of contemporary urban everyday life… Because it is quite probable that my life in the countryside has enabled me to hear the sounds of space within me, a space closer to nature and silence.

Intro into the Land (2009)
A musical souvenir from the land of Pannonia, a fictional land featuring an endless plain, which was once upon a time the Pannonia Sea… A sea that had one (if not the only) island – known as Fruska Gora, at the bottom of whose slopes I live and from where I see that terrestrial infinity much like an endless sea… Standing on the plain, one feels hopelessly small, nearly non-existent, and for me at least, when I find myself in the midst of this infinity, I feel an irresistible urge to take off. This composition is in fact an imaginary flight over the Pannonian Plain. Its central part is what I envision as a landing on a salaš* (a Pannonian version of a ranch), in the midst of an otherwise indifferent infinity, where a celebration is in full swing –where a  tamburitza** orchestra is playing a “bećarac“***… Here a paradoxical blend of melancholy and joy is the dominating mood in a space called Pannonia.
____________________________
* in Serbian salaš means a type of farm
** a Serbian version of mandolin or guitar
*** a form of folk music from the Vojvodina region, with often humorous and lascivious elements

The Path (2015)
The title of this composition refers to “the path of life”, and its musical form is very similar. As life is a path that we follow, not knowing what lies beyond the next hill or behind the next corner, we continue to be on this path the person we always were and yet with each station become different. Continuity and change: the dynamics – when we move along it; and the statics – when we pause and take a look back at the road behind us: the path…

Book of Happiness – Dance (1999)
A cycle of “miniatures” featured in Book of Happiness, which I wrote long ago, in 1999, during the NATO bombing of Serbia… Our historical reality was exposed to us when cruel and senseless forces were unleashed upon us in an unusually idyllic spring in which scents of lilac were giving way to scents of lily, and jasmine, and finally linden…
My idea had been to write one “miniature” a day, and once I began, I had to finish it – I was not going to leave it for tomorrow, because when bombs fall during the night, one cannot really rely on any tomorrow. These notes lay in my drawer for a long time, and last year, during a delicate health crisis, they suddenly rushed through my mind with echoes of: “How?” “Why?” Perhaps because those miniatures, although not being my best pieces, are probably the most beautiful ones I ever wrote. Perhaps I was thinking about a quote by Dostoevsky, in which he wrote,“Only beauty can save the world”…

Traveling Music (2014)
I’ve reached a stage in life in which I find myself travelling less and less physically… perhaps that is why I am“using” music as a“vehicle”.  Travelling, wandering, without a goal, without a destination. Surrendering to travelling itself.

Book of Happiness – Colour of Remembrance (1999)
One of my rare “love poems”. And love, a sentimental one I mean, is at its most delightful when it is gone, when we remember it…

Book of Happiness – Sunrise (1999)
When bombs struck at night, every dawn was as a new birth. “The sun is rising, we have survived.” … dawn – innocence, the tenderness of existence…

Book of Happiness – Delight (1999)
Music as a delight, a penetration through the membrane of space and time, an ascent into the paces of internal light…

Midnight prelude (2014)
A composition I wrote for a theatre play… It seems the ideal piece with which to conclude this album. Tones for the end of the day, shimmering like an opium vision, conveying that misty state between dream and reality… 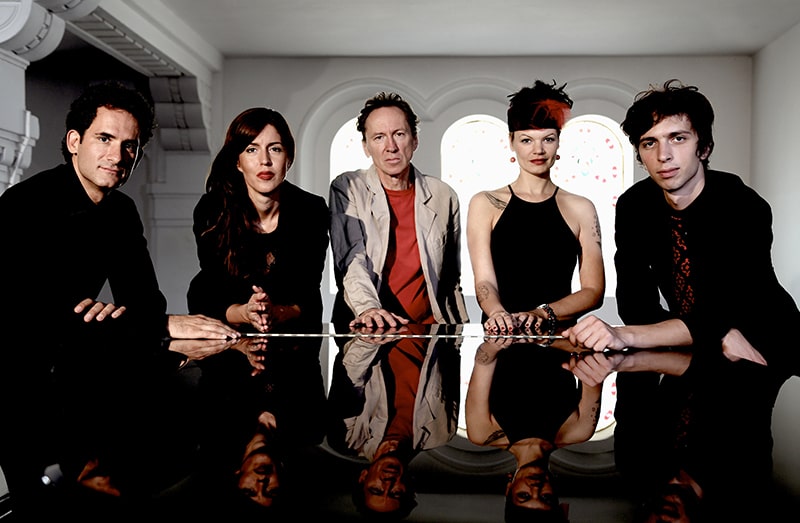 What’s remarkable about Boris is that he has carved out a musical form that transcends genre or even musical content; it’s a music of depth and feeling; and that’s what you hear beyond the notes or style.
From the ReR Megacorp catalogue.

And he has gathered, over time, musicians who can realize that quality. This, for Boris, is a small group, only five people, so they can be looser, more personal than the larger ensembles. Though informed by chamber music, Serbian, Romanian and Hungarian folk music, and jazz, you can’t file this record in any of those categories. Lyrical and ostensibly simple, these exquisitely coloured and beautifully recorded compositions float, occasionally changing density, but always solid enough to be clear about what they are. The drums are especially subtle in this regard, more touch than motor, but they make themselves expressive, even forceful, when they need to. For the rest, the music moves as a sinuous wave, the parts distinct but not separated. It’s autumnal, that I could say.