Published by PIRANHA, Berlin 2001.
Produced and mixed by Boris Kovac and Mare Vukmanovic,

“Take all what Life offers to You, Today You are Rose and Tomorrow…” sing the “Ladaaba Orchest” on one of their “Apocalypse Balcanica” tracks, trying to emulate a saloon atmosphere teeming with crude living “on the edge” – which usually refers to the Balkans. The fact is that this unstable ground, inhabited by a Babylonian blend of languages and nations which talk all at once without listening to each other, became a synonym of the occasional outbursts of endemic violence and other kinds of nihilism. Still, regardless of all, The Balkans are interesting mostly because of the crossing of different cultures and traditions which give birth to amazingly vital artistic products and strengthen the feeling of vitality, which is opposed to the notorious “death culture”.

“La Danza Apocalypsa Balcanica” is a myth and a story of the Balkanic area, the aesthetics of transience and coincidence which defy the games of fateful forces. It is an invitation to dance on the extreme edge of that abyss known as Yugoslavia (the authenticity of Boris Kovac’s artistic creed is not to be questioned, in spite of the offered “choice” between Milosevic’s rule and NATO air campaign) or a multistylistic masterwork weaving its aural pattern by interlacing various “music”.

…Today, it seems to me like I never heard records which really inspired me that much. One of them is the album of Boris Kovac. … “The Last Balkan Tango” pulls the soul out of the body; so much emotions, so much honesty, so much devilish good musicality is placed in this small framework…

Success of Kovac’s ensemble
…No, this album is not cheerful. It is sombre, tragical and dramatic, although there are careless and winged moments. Balkan dances, not the unrestrained round-dance, but falls into the wild exaltation of one bloody apocalypse. …His music, with its quality, shades the international music scene.
Since Laibach’s album Nato Occupies Europe, The Last Balkan Tango is the most piercing warning from the East.
Wolf Kampmann, Jazzthetik, Germany Jun 2001.
The album The Last Balkan Tango was chosen among the best “50 essential albums ever” by the popular Songlines magazine.

Indeed, a fascinated swaying in the rhythm of tango – with sharp movements of arms, legs and body which can hardly hold back its passion – is but a small item in the offer called “An Apocalyptic Dance Party”. Though the last dance call occurs in a terribly limited space, like with Schecherezade invited to tell her last story in order to postpone death. The firmament under which the listener is seduced mediates no feeling of anxiety: the sky may be cerulean blue and clear like in Mediterranean and life can either be easy and sweet at times. The dance drags us into a time left to Balkan people without pathos and the irresistible kitsch. In a characteristic manner, Kovac’s individual artistic style gathers compelling tones of the last music before the end of the world, inspired with the sound of the Balkans. His Orient Express travels according to the following itinerary:….. Budapest- Szeged – Novi Sad – Sofia – Istanbul. From within that composition (train) it sometimes seems that nothing is more natural on this planet than dancing with “LADAABA” and Balkan people, becoming engrossed in the time when apocalypse is already behind us and around us, the only unbeaten future which continuously recurs.

Looking out of that Orient Express, we pass through a multitude of themes and motifs, the multitude of faces and sounds characteristic of Vojvodina region, which is a Panonian part of Yugoslavia, inhabited by at least sixteen ethnic and national groups. No wonder, then, that you can recognize in this music the “shades” of gypsy, Serbian, Hungarian, Romania, Ruthenian, Slovak, Bulgarian, Turkish and other ethnic music. 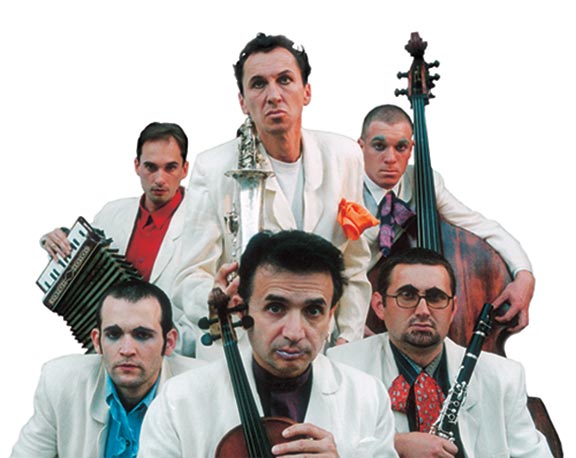 In the key of the fateful tango and playing with the image of the “great lover” who is placing his heart at the feet of his beloved, everything seems to be free and easy, almost like at a wedding party. Still, a part of the face is hidden in the shadow. Behind the sporadic gayety we can smell the “Geschmack” of a tavern more pertaining to Vienna than to the Balkans. At the turn of the 19th century, Vienna is noticeable for a typical central European Secession art movement whose rebellion against artistic conventions anticipates the decline of the empire. However, Vienna was the secret center of the Balkans. Therefore, Kovac’s composition (train) passes through Vienna on its way to the East…

Thus in the music of “LADAABA orchest”, a mixture of tango, folk dance and Secession, waltz and burek (a characteristic pie prepared in the Balkans), carousing, suffering and wit, laughter, tears, sacrifice and surrender, Dionysian drunkenness and vulgar primitivism, on the millennial edge, and for the sake of the promising moment of happiness, The Last Balkan Tango dances again – for dancing, not living, is what matters to us.

Translated in English by Vladislava Gordic