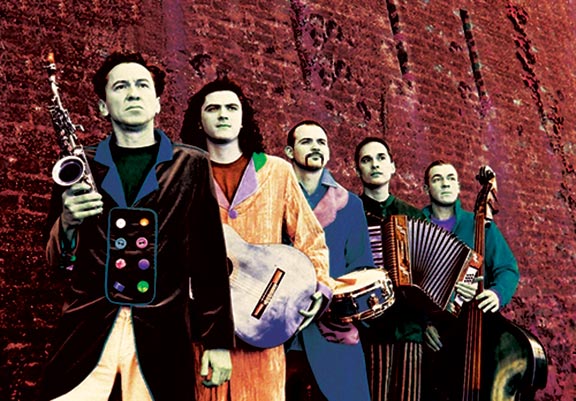 (Boris Kovač “To entertain you”)

Minstrel Songs by a modern Odysseus

Minstrel Songs by a modern Odysseus
On the outskirts of Frushka Gora mountain there is a small voivodian village where roads from the west, east, north and the south cross and where Europe and Asia meet, just around the corner, at the belly button of the world. It all seems to be very close yet all is distant. In the centre of the village there is a church painted in white and is surrounded by many old houses. One of the most beautiful ones has a kachara, a basement with a deep shade where people used to keep wine and brandy. It is now Boris Kovač and La Campanella’s music studio, a sound workshop where instead of alchochol drinks people make music. Sometimes, during the summer, music can be heard from the yard and the dogs begin to wail longing for their unknown behalfs.

One night Boris Kovač woke up and saw an unknown god sitting in his room. What the god told him we can’t tell but his senses were moved and his feelings aroused. Not knowing what to do he begins to play a tune that has been haunting him for years, and keeps hearing this inner voice both in the spanish guitar key and in the voivodian tambura. The panonian and the mediteranean melancholy thread on the same line. How to delight such an important listener on a night that has detached itself from time and space, on the edge of the real world? By wandering, dreaming, barking at the moon, imagining a gondola dragging on the sand of imaginary cities? From the labyrinth of history, the cry of distressed and deadened voices, surrounded by barbed wire, bomb sounds and airplane engines that have been sawing the sky, to come out with an art, a love song, an argentinian dance. Despite Auschwitz, the easiness of forgetting, the time machine in which we live in, the Monday-Friday routine, a friend whose life is on a string when he returns home late at night, sits on the armchair and plays a Mahler symphony on an old record player while his stomach has an aneuristic time bomb that slowly paints the sky with a vivid red colour. Despite that…

Kovač would rememeber all of his romances, elegies and ballads that he plays and then all those branchy creepers – irony, dynamic waltz and virtuosic swing. He plays easy notes on countless different ways, the music of the world, the music from all coasts, and just like a swimmer on the golden sand of the Red sea, hidden beneath a rock from an enormous swelter and the summer sun, he can only hear his own breath. And to rememeber the melody that Odysseus fed upon since he woke up, not knowing that the rock above him has started to crack. How can someone elicit music from a destructive power that wants to destroy you, and at the same time to be playing with people’s raptures and providences, running away from the avalanche over an unknown glacier. How to embody the metaphysical feeling of easiness and simplicity, to weave the kaftan absolute, to go down on descends through Tibet and to pass through the rivers of forgetting with a train speed?

It’s the same meditation in the night, that won’t allow the conscience of the whole world to be emptied but vice versa: it wishes to keep its happy moments, that are enough silent to be heard and loud enough to be merry. Kovač would mumble a mantra with the same words that would announce the following tune, while trying the saxophone or while speaking to itself. “Uh-Um, all right, the danger is still near, the world is no longer a nice plays for living, but it’s no good crying and to give in yourself to desperation, and the tragic feeling of life. On the other hand, music is not an analgesic, drowning with alcohol while going with the elevator towards the execution ground. One should play music while the world is collapsing. It is both sad and joyful. Maybe this will last and it will be a mischief to waste time. Maybe this way we will feel better, just like a melody from the other side of the century that suddenly will arrive in the heart of the city.”

While trying to merge accordion and a guitar, or meticulously trying to clean the sound of his compositions at the mixing board, he keeps repeating his mantra. It is here around him even when he is taking on the role of the minstrel, the wandering musician, the modern Odysseus and while he looks over his shoulder towards the audience that he will take into his story. While he is preparing and dressing himself, with an easy step he joins the carnival of various faces, people and gods. Then he begins to play.

Relja Knežević, from the Cd booklet

…all this Yugoslavian bandleader¹s excursions are voyages beyond the expected…
His ability to veer from heartbreakingly gorgeous melodies, fluttering wings
of brass symphonies, into breakneck accordion-driven fury is
incomprehensible. One can only imagine shifting drunkenly in a tanchez
(dance house) in a state somewhere between paranoia and ecstasy. World After History, like its predecessors, is a soundtrack to the movie of Kovac’s mind. It envisions a sacred space stretching past dualistic thinking…Kovac is as much philosopher as brassist ­ he seeks personal spaces which make sense through incoherence. ..it¹s an inner realization that moves us past the realm of linear thought. After you¹ve meditated for a bit, turn on World After History for the closest interpretation imaginable.
Derek Beres, Sing Out! Magazine, winter 2006

From Cuba to Pannonia. Pannonia is located in Serbia, ex Yugoslavia and it is the homeland of Boris Kovach, the music genius who has given us this new record that surpasses all his previous works. Boris has named it “World after History” and it seems it is a religious confession of music Hinduism…
orsinos lied Q U E Rfunk Karlsruhe Erstsendung: Sonntag, den 14.08.2005
13 Uhr Redaktion & Moderation: Roland Altenburger
…The music merges hope with melancholy, folk traditions with orchestration, nostalgia with optimism. Tuneful and rhythmic and led by his own fluid playing, Kovac’s music is both grounded and path finding – a testament to the resiliency or culture and spirit in a region trying to repair itself after a decade of horror.
Shepherd Express

This is not hard music, however, the depth is in its subtle penetration. Kovac creates long, creeping symphonies that are more potent sedatives than drilling rhythms. World After History, like his prior efforts The Last Balkan Tango and Ballads at the End of Time, is future classical, as nimble and light as it is charged. As a result of his theater passions, Kovac takes the empty space of sound and fills it majestically.
Global Beat Fusion 08/01/05 FrootsGarth Cartwright…

Seductive as this album is – beautifully recorded with all players offering a fat weave of sound … World After History is still worthy of purchasing if only the sounds of an older, more laid-back and baroque Europe are rarely captured as they are here.
European Broadcast Union: World Music Charts Europe /
List for July 2005. World After History CD Piranha was at the 2. position!