Includes unlimited streaming of The Last Balkan Tango Collection via the free Bandcamp app, plus high-quality download in MP3, FLAC and more. 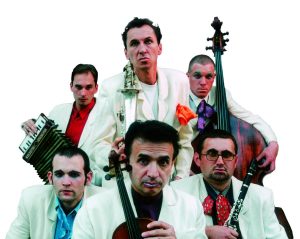 Almost 20 years after the original recordings and with more than 100 concerts all over Europe and Japan, »The Last Balkan Tango Collection« brings remixed and fully remastered material from begining of the century: The Last Balkan Tango (chosen among the best 50 ESSENTIAL ALBUMS ever, by the Songlines) and Ballads at The End of Time by Boris Kovač and LaDaABa Orchest (La Danza Apocalypsa Balcanica) 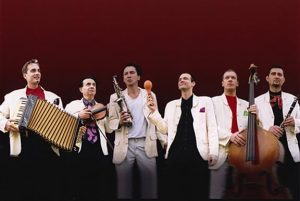 Songs on this new album, composed by one of the great artist from Serbia, have the same power as when they were composed, inspired by the madness of the war. The end of the war in former Yugoslavia came with bombing campaign, first one in Europe after WW II. Nowadays, the madness is here with us again, but this time, it is not just a local Balkan issue. Over the last few months the whole world is facing THE CORONA VIRUS. The one able to stop almost everything and we do not know when and how to stop this. So many questions without answers. Most of us are spending days and weeks between four walls of our homes, with our loved ones. Some in fear, some in hope. But, there is always… a DANCE.

LADAABA ORCHEST OFFERS YOU THE PERFECT TOUR FOR THE VERY LAST NIGHT IN THIS WORLD:
THE LAST DANCE PARTY
LET’S DANCE! LET’S DANCE!
IN HOPE FAITH PLEASURE LOVE
LET US BE HAPPY AT LEAST ONE MORE TIME IN LIFE
LA DANZA APOCALYPSA CORONICA 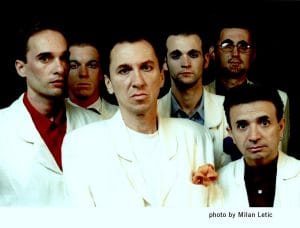 “Kovac proves that we, humans, still manage to move the cosmos with our music, to find hope in our inner spirits and seek a way out of the morass…”
Clif Furnald, Rootsworld

“No, this album is not cheerful. It is sombre, tragical and dramatic, although there are careless and winged moments. Balkan dances, not the unrestrained round-dance, but falls into the wild exaltation of one bloody apocalypse.”
Wolf Kampmann, Jazzthetik